Introduction to the A9G

IoT devices mainly use AVP, ESP and STM32 microcontrollers. To connect GSM or GPRS, you have to connect separated submodules, which greatly clutters up the final device. Not everyone knows that there is such a module as A9G gps tracker. It has a compact SMD housing that combines GSM and GPRS modules. All that remains when working with it is to connect the antennas and power. The module can be controlled using AT commands from another microcontroller or through its own SDK firmware. The A9G arduino module is developed by Ai Thinker, which is also a manufacturer of ESP microcontrollers.

In this guide, I will try to briefly explain the first steps to work with the A9G with GSM, GPS, GPRS modules. I will install the necessary software and try to control it using AT commands.

The photo shows that in my case GPS and GSM antennas are connected, and a SIM card is installed(on the backside).

If all the components are present, download the program to control the module using AT commands: Download

At the first steps of learning a new device, you need to try all of its functionality. The module comes with firmware that allows you to accept AT commands and process them. We connect the module via a TTL converter (mine is based on the CH340G chip)

Make sure to connect everything correctly. In addition to the RX and TX connectors, the module has HST_RX and HST_TX connectors. They are intended for downloading firmware and further debugging.

Run the program and open Serial port. Press the RESET button on the module itself and wait for the module to initialize.

The program interface is intuitive, but I have marked each zone and described it 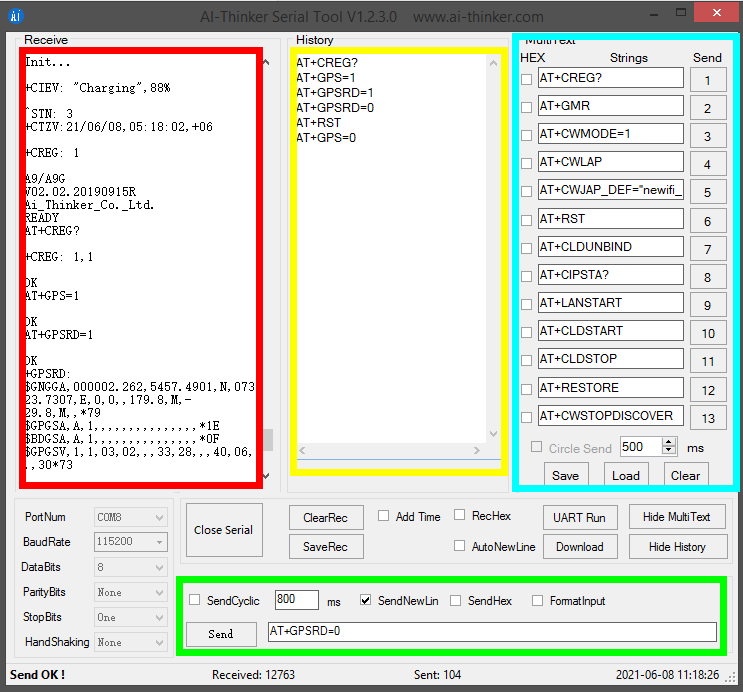 The module works out of the box. It is possible to receive AT commands and process them without reflashing. Do not forget to connect GSM and/or GPS antennas for the first test.

The A9G module has GSM capabilities with the help of which it can be used to start a call, receive a call, and send an SMS as well when we dial the number whose SIM card is inserted within the A9G module a “RING” message will continuously appear on the monitor. The AT Commands which can be used for calling and sending SMS using the A9G are:

As the A9G module comes with an inbuilt bootloader and hence it can be controlled using AT commands and can also be used to transmit commands as well.

Some useful AT commands are: